A tensile test is conducted to determine the tensile strength of industrial thread and yarn. Tensile strength refers to the ability of a material to withstand force (pulling or otherwise). This strength test is usually measured in units of force per cross-sectional area.

When working with industrial thread and yarn, tensile strength typically refers to the strength and elongation properties of a particular material. A material’s resistance to breaking under tensile stress is one of the most important and highly-measured properties of materials used in applications such as wire and cable, geotextiles, tarps, web slings and more.

The video demonstrates the ASTM D2256 basic test procedure. For this particular test, an Instron 3345 constant rate of extension tensile tester was used with the following considerations:

Each of the grips shown has a clamp followed by three inches of testing surface with a four-inch gap in-between the upper and lower grips. There are different styles of grips available for different brands of equipment, but the concept is basically the same. The length of the yarn sample is determined between the two clamping surfaces.

To prepare the yarn for testing, secure the yarn sample in the top grip, then carefully wrap and secure the sample into the bottom grip. Depending on the type of equipment used, the actual test may begin automatically or need to be triggered manually:

For each specific sample, nine tests are conducted to get a good average of the material’s performance.

Test results are recorded as follows:

In the video, to demonstrate the difference in results that should be seen between a flat yarn and a twisted aramid yarn, two separate tests are conducted and their results are recorded. The first test uses a flat aramid yarn. For the second test, the same base aramid yarn is used but has been twisted at a rate of two turns per inch.

The results below show the difference between the flat yarn and the twisted yarn.

Twisting the material allows the fiber to break as a bundle, making twisted yarn a much more accurate representation of the actual breaking strength of the entire material sample.

You may have also heard reference to ASTM D885 which incorporates the same basic test method steps as ASTM D2256 (shown in the video), but is more geared toward tire cord and tire cord fabrics. There is also ASTM D7269 which is a standard test for aramid yarns using the same test apparatus with just slightly altering the test method.

Do you have questions about ASTM testing for industrial yarn and thread or need assistance determining the best yarn tensile strength for your application? Service Thread’s experienced materials specialists can help you improve the performance of your product. 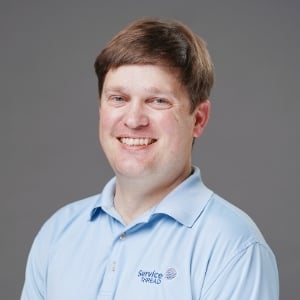